Does your client thinks his startup is the greatest thing on earth?

Your client is wrong. But who really cares? When it comes to “getting press” a startup chief has to be ready to take on all comers.

That’s part of the problem with being a startup. The founders think it’s the best bread since sliced–and have the audacity (some say confidence) to believe they are better than a lot of the press being offered. Which is poppycock.

Another problem is that these startup types think they know how PR works.

In fact, very few people are worthy of being in the media—and as for products, hardly any. Knowing how Public Relations works? Even fewer know that magic answer.

I was recently saddled with a client—Rename Maneless—who scoffed at bloggers who wanted to get more information for possible stories on the soon-to-launch thing being offered. Scoffing is rude, first of all. On top of that there was the ages-old argument of “We can do better.” Blood now boiling, I asked this allegedly smart chief thingamabob if he knew the blog he was turning down had 50,000 readers, and did that number meant anything at all?

The answer was a walloping no. Because, and you can say it with me, it just wasn’t high level enough for his time, attention, or taste. Heavy sigh. I wondered if he knew what a high level was.

So I played a game with this genius. I told him that if he did the one interview, I’d promise him one with a major magazine. Little did he know that the first interview wasn’t even a promise of a story—and no major anything stood on deck. Man, it was like getting a kid to eat his veggies; he shrugged and said okay.

After the blog meeting, this problem child was so happy with the experience and subsequent result that he completely forgot about my disappearing magazine piece. (He really was not ready for prime.) I made him see how snobby he was being toward a real live reporter.

We wish our problems could be solved this easily.

But here we go: The next unfortunate request to the same guy came from a podcaster. This was, he said, lower than terrestrial radio–as if radio was evil. I turned the request down. There are only so many hours I can waste playing adult games.

Still, there’s one more problem with startup heads that arises when big-time media start calling. They get insecure. “I just don’t think I’m ready to talk to Time magazine,” one said. But how would you know? Do you think I’d let you sit with a reporter whom I didn’t think you were ready for /slash/ prepare you for? It’s my ass on the line!

The insecurities linger and even after it’s been decided—by me—that he’ll do it no matter what, the late night phone calls start in—and emails and texts, followed by voicemails in the office when he knows I’m gone. “I don’t know, Richard. I think it’s too early!” Too early for? Your nervous breakdown? Please.

Yeah, we face a lot of pretty regular dilemmas in PR society. We deal with Montana-sized egos and paying folk who have no think-before-I-speak button—or think something, then say it without realizing it was better left in one’s head. But some people are such know-it-alls that all our dealings are a uphill trail. To them we have to decide whether to fight or surrender.

There are painful times when it’s so difficult to get a spokesperson to speak that you have to tell the requester that the product isn’t there yet. “It’s a new company and they have many kinks to work out. When they are you’ll be the first to know it,” you lie.

Nowadays, you need an imaginary Psychology degree to cope with people who decide what’s good enough or what they’re ready for…

Another way to skin this: Want to win your battle? Draw a diagram. Like a presentation—like the Powerpoint she uses in every meeting. Show the good emitting from the piece, and explain what bad will occur if she doesn’t chomp the bullet.

That’ll work until exhaustion sets in; you realize there will always be a startup needing to be talked into something. That’s when you run for the covers. 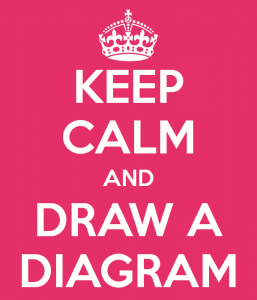 Keep Calm and Draw a Diagram