I’ve come up with 8 tips to help you land your dream job, excel in it, and prove yourself as a recent college graduate in the ever so hectic and cluttered public relations industry.

Let’s Change That Saying Once & For All

In the 300 years during which I’ve worked in a service business, I find that the people who hire me are not looking to be right. They’re looking for me to tell them what is right.

The very concept that somehow they know—because inherently they’ve done this in a previous life—how to do PR, seems a little off. I have watched a few dozen PR firms that look, smell and taste just like mine simply ‘yes’ their clients to death, only for said customer to find out later that nothing was really done on their behalf.

It’s what I call the “make it easy on yourself” theory: If you just nod and go with the flow, no one will argue with you. Yeah, that’s not the secret to life.

See, if you’re actually doing something for your clients, you have to break a few eggs. You need to explain precisely what you are doing and show the client that what you’re doing will net results.

I have always felt that talking a client into something that is right for them is simple. You explain what they get for participating in your grand scheme—then explain what they don’t get for not taking part. It’s pretty logical. And to quote Arnold from Twins: “I like logic. I’m a big fan of logic.”

People coming to me to tell me how to do PR  is so nonsensical it makes my head hurt. When the perennial question comes into play—“What is a story that we should be telling?”—I’m glad they asked.  We’ve worked in around 40 industries as a generalist firm, and we know which stories work and which don’t. It’s a cliché to say—but what “plays” is second nature to us. In the dot-com days, we learned the hard way that a release stating Our CEO Sneezed will get laughed right out of the room. The idea that you think something your leader did is media-worthy is—funny. A story has to have an awesome angle, or possess something tied to the news, in order to procure coverage. Just to put something out because you feel like it is pretty stupid. All it does it make the recipient or reader roll their eyes until they feel like they are coming out of their sockets.

You can trace that notion of everything being press-worthy back to the demise of the once-decent internet provider “Aol.” (yes, Aol., not AOL—their branding). See, I watched them for years release something they called news every single day —whereby reporters saw this as a boy cried wolf scenario and trashed every single one. When America Online did something of value—I think it was version 12.0 that really had a path to greatness—the media didn’t even look up. That release (which I read with interest because a monolith had done something right) ended up in circular file cabinets worldwide.

This is called Machine PR. It’s thinking you can churn out a constant stream of not-very-interesting news and somehow if you do it enough one thing will end up in the news. It’s not how any of this works. PR is a relationship-based business, which means we can’t RUIN those relationships by shoving shit down the throats of those influential journalists.

Customers who leave the work to the people they hire usually win. Naturally, I want to say “always”, but then I know that media-savvy clients are the cool exception. There are surely people who do know. It’s because of what they did in a prior life—or majored in once—or because this is something that fascinates them. I adore the clients who are “media junkies” because they’re ones who respond right away to an idea from our team—and come up with ones deriving from a plethora of reading. Those are some melodious tunes to my ears.

The bottom line to this heartfelt dissertation: The customer is only right when the customer knows what the heck she is talking about—from experience or research/knowledge.  It’s true—leave the expertise to the experts. Admit you’re wrong. It’s healthy. And it pays off. Always. Just ask that CEO who sneezed and did not bother telling anybody.

Richard Laermer is the bigmouth CEO of RLM PR.

Gumby: Mascot of Our Firm 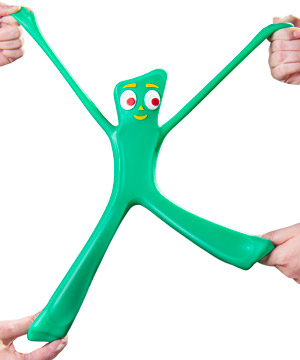 In the 1950s and ‘60s, the green Gumby and his pal Pokey were TV fixtures as they joyfully lived the adventures kids dreamt of: going to the moon, jumping in and out of books’ fanciful tales, hanging out with people from far-off lands. Because he was a Claymation™ creation, he was eminently flexible and had a special knack for getting in to, out of, and through fantastic and often-danger-filled escapades.

Gumby lives on in us.

Gumby’s power is much more than flexibility. He is more than ever becoming key to success in whatever world you tool around in. The next time a colleague, friend or Aunt Bertha asks how you triumph in the face of unbelievable odds, tell them “Gumby.” If she runs off looking for the latest gadget codenamed for our little green hero, let her go. If on the other hand she asks what do you mean…?

Snarky is so darn fashionable, as popular culture lauds Gawker and its cadre of follower blogs that pride themselves on carefully-crafted sarcasm and forever cynicism. He is confident, ambitious and willing to get the job done—that’s the scintilla of “real Gumby.” He is optimistic and focuses on solutions—not problems. You call it like it is … and then you are willing to get how others see it.

Lazy is easy. Action is often strenuous and sometimes exhausting, but those who have Gumby (or saw him on TV) know that taking the effortless path rarely gets you where you need to be. Identifying nascent trends, for example, requires vigorous analysis of information from multiple sources, searching beyond your comfort zone.

Ultimately, Gumby the flexible character was all about getting the job done—and well in a timely fashion—effectively using all tools available. Gone are the days when tasks came with a “when you can get to it” deadline. If you’re lucky enough to remember the office euphoria when IBM introduced Correcting Selectric then your head probably spins at the plethora of tools available to business folks in our day. These tools can help or hinder, and he is knowing how to use them to deliver results that measurably impact a bottom line, whatever your department.

In each of his escapades, he learned from those around him. He sought information and explanation, and had fun doing it. Today, we’re bombarded by data from more sources than we can count, and those who embrace he invest the energy to constantly expand their wealth of knowledge.

Those who have Gumby participate. They do not sit idly by and watch from the sidelines, these are those who jump in and use wit and intellect to get ANY job done. They overcome the most troublesome glitches and find innovative solutions. He isn’t yes-or-no; it’s how and why.

Ask anyone from the Air Force who will tell you without blinking that on day two, someone told them no matter what, “Remember that nothing is a problem.”

In the military they say it best: Semper Gumby!